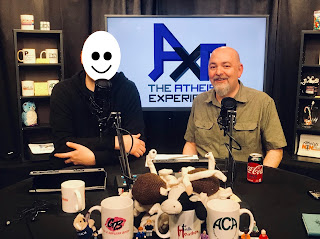 I've mentioned The Atheist Experience show several time before and how much they have helped me work through my indoctrination and shape my epistemology. However, I didn't think I would ever get the chance to actually visit the show or meet the hosts.
I recently got a new job that is located in the Austin TX area. Since I live several hours away, I am able to work remotely, but I am expected to visit the office each month. So on my first visit to Austin, I decided to go to the Free Thought Library (where The Atheist Experience show is filmed). They film 2 live shows there on Sunday so I wanted to be part of the live audience for both. I didn't know what to expect or if I'd feel comfortable meeting new people. However, what I experience was so much better than I could ever imagine.

I arrived around 1:00pm, right before they were going to start filming Talk Heathen, a show that is not quite as popular as The Atheist Experience but has a similar premise, people call in to discuss, debate, and defend their beliefs. The library itself is a small 1 bedroom house that has been converted into a studio. It is on a street with other similar small businesses. When I walked in the front door there was already a small group sitting in the guest area looking into the production room that was separated by a large glass window. I saw one of the hosts, Eric Murphy, sitting and talking with some of the guests. He immediately welcomed me enthusiastically. I said, "Hi Eric!" to which he replied, "Hey brotha, have you been here before, I'm sorry if I don't remember you." I explained that it was my first time and that I just knew him because of watching the show. Everyone was very friendly and welcoming.

The show began after Eric made some announcement about being good audience members and expressing his gratitude for having us there. He talked about how this is a community and place for people from all walks of life to gather together and share their experiences in a safe environment. It was actually very touching and almost brought me to tears. It was one of the first times I didn't feel so alone in my journey.

I loved sitting in the audience and watching the show live. Afterwards, everyone hung out together and chatted. I was able to interact with some of the other guests, members of the Atheist Community of Austin 'ACA' (the parent group that owns the library and that host the shows), and hosts and talk about my upbringing as a Mormon and even met one other guy there who was a former Mormon in a similar situation. Later, we were invited into the studio to check out the set and take pictures. I got my picture with Eric. 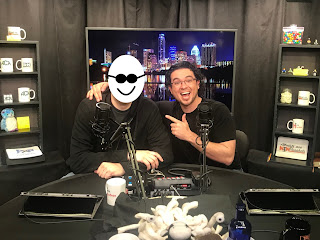 The Atheist Experience started a couple hours later. The crowd was larger this time and there was a similar introduction from Eric before the show began. One of the hosts was Matt Dillahunty who I have quoted in other posts. I was a little star struck as he is someone who I have watched and followed for the last few years and has been a huge inspiration for me. It was a lot of fun being part of this larger crowd and meeting so many new people.

After the show, everyone hung out and the ACA provided free dinner for everyone in attendance, Pizza. I heard a few people mention to Matt that he was their hero, to which he would almost always jokingly respond with "Stop having heroes." He was just kidding but not really, he thanked them for coming and was happy to take pictures and speak with anyone. I actually got to sit across from him at one of the table during dinner and have a fun conversation. He was talking about his recent divorce and how he was dating again, he talked about some of the previous callers and experiences he had on the show, and answered all of the questions we were throwing his way. I tried to keep myself grounded and just let everything soak in while simultaneously not spurting out my admiration and hero worship to him. I'm glad I held back.

Later, I was able to take a picture with Matt in the studio and thanked him for all he does and for being an inspiration. He was very kind of thanked me for coming to the show. It was a great night and something I will never forget. I'd like to visit the library more in the near future and be part of the community. Thanks ACA!