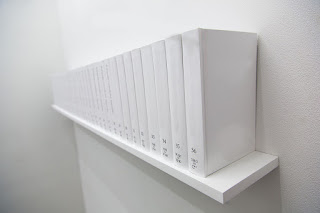 Placing an item on your shelf is a concept that is well known in the exmormon world. Simply put, there is an imaginary shelf (in our minds) where we can put our problems or concerns regarding church teachings, and later on go back and explore them or forget about them entirely. I don't think this is unique to Mormonism, but it tends to be a very common phrase. The wife of former LDS President Spencer W. Kimball, Camilla Kimball, was most likely the first to mention this idea in regards to Mormon theology.


Camilla [Kimball] had a philosophy about religious problems that helped her children. She said that when things troubled her, she put them on the shelf; later when she looked at them again, some were answered, some seem no longer important, and some needed to go back on the shelf for another time.

-Search, Ponder, and Pray: A Guide to the Gospels by Julie M. Smith

In other words, if you come across some troubling Mormon history or doctrine that you don't agree with or understand, you can place this item on your shelf and temporarily forget about it. Then later on, when you've gained more knowledge, you can try to understand it. Ultimately, this is playing mental gymnastics and trying to find ways to justify unreasonable beliefs or policies. By just placing these concerns elsewhere, you are losing the chance to make an honest assessment of your belief system. Thus, you're just waiting until you are more convinced that what you believe is true, then all those pesky little questions don't really matter.

Most people who end up leaving their belief system describe their shelf "breaking" from the weight. They just had too many unanswered questions or concerns that were never worked through. This is a reasonable excuse to leave a particular religion and if you have fundamental differences of belief or opinions to those of your church, why would you stay? For me, I never had a shelf. I could justify almost anything. I could come up with a reason for almost every belief or claim no matter how absurd or bizarre. I would probably call myself a Mormon Apologist during this time.

The LDS church, to its credit, supports the idea of asking questions and resolving concerns. Most leaders in the church will suggest researching, but ONLY official church material, to find answers. They will also suggest prayer and scripture study. But how does this resolve actual concerns about doctrines and church history that the LDS church is known to dismiss or hide? Once someone starts researching facts outside of approved church documents, the truth becomes much clearer.

Cognitive Dissonance
As a missionary, I had to defend against every kind of anti-mormon attack that came my way. I felt a desire to come up with a reason for any of our beliefs or claims that others would consider to be unbelievable: Black people not allowed to have the priesthood until 1979, polygamy, the real reason why Joseph Smith was arrested, similarities between temple ceremonies and masonic rituals, problems with the Book of Abraham, entire bible chapters found in the Book of Mormon, horses in the Book of Mormon, and even why we can't drink coffee.

I had an excuse for it all. However, underneath, I remember feeling disingenuous. I honestly had a very difficult time justifying things that I knew were probably not true. But I was dedicating years of my life to this cause and to this church, so I made every effort to defend my beliefs. Doing this helped me feel confident that I wasn't wasting my time. I never placed these concerns or questions on an imaginary shelf, though. I didn't feel the need since I could come up with a solution to every question on the spot. My shelf didn't need to break, it just wasn't ever there.

My Imaginary Bucket
If I had to use symbolism to explain my loss of faith in LDS doctrine, I'd probably describe my beliefs as a bucket. I placed all of my beliefs and justifications in a bucket and could grab them at any time. I could hear a concern and find the answer somewhere in this bucket, then I'd place it back inside when I was done. Suddenly, as I came to a realization that my belief in God was flawed and that I rejected those claims, it was as if I drilled a hole in my bucket and everything started to leak out. I no longer held any justifiable beliefs in the supernatural or theistic claims. My bucket is now completely empty. This also means, it's much easier to carry around.

As a true believer, especially as a missionary, I would come across all kinds of information that I would immediately reject and call "anti-mormon" material. It was easy to ignore since they all appeared to be written with a very specific goal in mind, to turn people away from the church. In doing so, movies like The God Makers, DNA vs. The Book of Mormon, and books like Rough Stone Rolling, and No Man Knows My History were just part of Satan's agenda and took things out of context. I was aware of a lot of the claims found in these movies and books, and I came up with my own explanations and excuses in order to defend against them. And to be honest, many of them are guilty of being very biased and presenting information somewhat out of context. After separating myself from this belief system, I have found value in materials that I use to disregard as irrelevant.

Later, after realizing I no longer believed, I came across the CES Letter (Letter to the Church Educational System Director). This document was put together using almost all official LDS church material and points out some major problems with early church claims and doctrines. This, along with the Official LDS Church Topic Essays (a collection of essays written and released by church officials to explain and expose troubling church history) further validated my reasonings for not believing the claims made by the church. To many others, this was what eventually broke their shelf.


The only position that leaves me with no cognitive dissonance is atheism.